skip to main | skip to sidebar

Every month in 2012 we are featuring a fact file about a different dragon – each one a wild amphibian or reptile species that can be found here in Britain. However, as this report explains some of these species are new arrivals that have now made themselves firmly at home. Froglife Living Water Project Officer Rob Williams has been investigating one of the most beautiful of these new arrivals – the Alpine Newt.
“Benjamin Franklin once said that “beauty and folly are old companions” and in the case of Alpine Newts arriving in Britain, he may well have been right! The Alpine Newt is native to northern, central and eastern parts of Europe.

However during the 1920’s Alpine Newts were introduced into Southern England. Since then scattered populations have become established across Britain, with colonies reported in Kent, Surrey, London, Birmingham, Cardiff, Edinburgh, Sunderland, Shropshire and central Scotland. One reason for this widely scattered distribution is likely to be people deliberately introducing them into parks and gardens, attracted to do so by the newt’s exotic colours and beautiful patterning.
However, behind their pretty exterior the Alpine Newt had a hidden secret that was only recently uncovered. Alpine Newts are now suspected to be carriers of the Chytrid fungus which is currently endangering amphibian populations around the globe. Chytrid fungus has now been detected in the UK’s native amphibian species and while there is no evidence to suggest Alpine Newts were the cause, introduction of exotic species is one possible way that the fungus reached our shores. For these reasons Alpine Newts are a research priority and therefore reporting any sightings to Froglife or your local records centre is really important!” 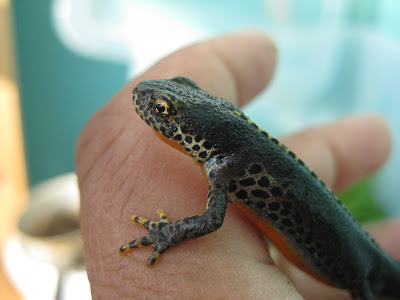 Dragon Facts:
·   Despite their name Alpine Newts occupy a range of lowland habitats, including parks and gardens, as well as being found in upland areas (up to 2500m above sea level).
·       In some parts of their native range there are populations that are entirely neotenous. This means that the newts, even when fully grown, retain their gills and thus never leave the water.
·     As an introduced or “alien” species in the UK, it is illegal to release Alpine Newts into the wild, even if that is where they were caught or found.
·      One reason scientists are concerned about Alpine Newts in Britain is that when infected with Chytrid fungus, they do not seem to be affected by or display any symptoms of the disease. This increases the likelihood that they could spread the disease to areas with more susceptible species.

Identification:
·   Alpine Newts are similar in size to the native Smooth and Palmate Newts. Females are largest and grow up to 12cm, whereas males only reach 10cm.
· Both sexes are colourful and have a bright orange belly without any spots. The newt’s bodies have a marbled appearance with male’s bodies tending to be bluish black-grey whereas females are generally much browner.
·  They also have a bright blue strip that runs along their body, adjacent to their orange belly. Above this strip they have a band of spots on a light background.
· In the breeding season males develop a low, straight crest, which is white with black spots.
Tweet
Posted by Sam at 12:05 pm

Get Croaks direct to your inbox >>>